By: Vee Castillo   “People, politicians, cities, states, etc., should all hear from cannabis patients regarding cannabis and quality of life. Many will find patients reporting that their quality of life improved since they added cannabis to their treatment plans.”- Nicole Buffong Resilience, truth, knowledge, and determination are just a few words that come to […] 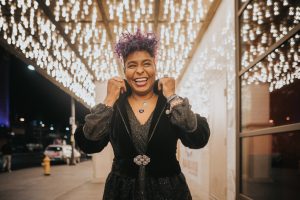 “People, politicians, cities, states, etc., should all hear from cannabis patients regarding cannabis and quality of life. Many will find patients reporting that their quality of life improved since they added cannabis to their treatment plans.”- Nicole Buffong

Resilience, truth, knowledge, and determination are just a few words that come to mind when I think about Nicole Buffong. The Las Vegas resident who relocated from the south for safe access to cannabis, former Georgia Chapter President of Minorities for Medical Marijuana, and current Western Regional Director for Minorities for Medical Marijuana, is on a global mission, starting with the United States.

From childhood, Nicole Buffong has been battling medical conditions/health complications, and since that time, Nicole has been aware of the medicinal value of plants, including cannabis. With her bloodline linking her to the Caribbean, her roots grounded in the south, and a passion for healing with plants, Nicole is on a mission to educate and create safe access to plant medicines like cannabis.

Nicole’s story is like many who have medical conditions/complications that cannabis can help with, but live in states that prohibit cannabis. Wanting to treat medical conditions with cannabis isn’t a choice that comes with zero consequences in many places. For Nicole, that place was Georgia and the move she made was to Las Vegas, but not before launching the Georgia Chapter President of Minorities for Medical Marijuana:

“After I was diagnosed with HIV in 2017, I began a research project into understanding how cannabis is used medicinally for a variety of diagnoses. That’s when I learned about the endocannabinoid system. I learned about the different compounds that make up the cannabis plant, and I began to do research on legislation. I wanted to understand how to change the laws regarding cannabis being consumed as medicine, specifically in Georgia because that’s where I was living.

Nicole Buffong- Before the Cannabis Industry

A straight A honor roll student with allergies that caused seizures, and a medical doctor in the home, Nicole always knew the truth about the medicinal and healing value of plants and herbs:

“Both of my parents are from the Caribbean. My mother is from Trinidad and my father is from Dominica so my relationship with cannabis from an early age was different than most Americans.”

Nicole battled medical complications as a child that led to episodes. Though her father was a doctor, her parents chose to treat her allergies and seizures using alternative methods- no prescriptions:

“I had allergies that caused seizures that started when I was 8-9 years old. My parents fought hard to not get me labeled as ADHD and refused to put me on Ritalin or any other seizure medication. Once we determined that the episodes correlated with my diet and environmental exposures, we adjusted without pharmaceuticals. My parents changed my diet and included humidifiers inside my classrooms which helped reduce the amount of episodes.”

By the 11th grade, cannabis became a part of Nicole’s life. She began to consume with her friends and noticed that her episodes diminished. This was during the same time that Nicole chose to be honest with her father about her consumption of cannabis:

“In the 11th grade, my father confronted me after a night out with friends and asked if I was smoking weed. Of course I did not deny it because at this point I had already found a pipe of his hidden in his bathroom with cannabis residue in it, so I knew he knew what it smelled like and what a person that was high looked like.

My father never punished me for consuming cannabis; it was only the tobacco that he had a real problem with. He had love for the plant like I did so it was more of an understanding. ”

By the time Nicole was in college, cannabis consumption was a part of her day to day. Because of drug tests, she mostly worked bartending jobs, and jobs that didn’t require drug tests.

In 2006, Nicole suffered a loss that changed her life. Her father and sister were killed in a car accident:

“My father and my sister were killed in a car accident in Atlanta on their way to my 25th birthday party. This accident changed the course of my life for the next 10 years because I did not understand how to manage my grief and guilt.”

Nicole tried to find healing and comfort through cocaine, ecstasy, and sex. In 2017, she received news that would change her life again:

“Using cocaine, ecstasy, and sex to try to self medicate, culminated into the diagnosis of HIV which I received in early 2017.”

Following the teachings of Dr. Sebi, Dr. Africa, and Mama Afua’s, Nicole focused on the medicinal properties of cannabis, and consumed an alkaline diet-an eating plan that emphasizes fresh vegetables and fruits with the aim of maintaining an optimal pH level in the body.

“Dr. Sebi , Dr. Africa, and Mama Afua’s teach that an alkaline body cannot carry disease and so, I began my intimate relationship with plant medicine instead of synthetic medicine to help heal my body. This is due to my upbringing, because of my cultural roots to the Caribbean, that I knew how valuable implementing plant medicine into my treatment regiment was.”

Nicole Buffong- In the Cannabis Industry

Nicole is on a mission to change the narrative when it comes to cannabis and its healing effects. She wears multiple hats in the cannabis industry:

Western Regional Director for Minorities for Medical Marijuana: “As Western regional director it is my job to find leaders in the states that I manage that will best be able to execute our mission. In each state, the best way to support Minorities for Medical Marijuana is to become a member. You can learn more about membership at www.m4mmunited.org. I manage 8 states: California, Washington, Oregon, Oklahoma, Colorado, Arizona, Nevada, and Hawaii. April 17 through the 25th will be a week of service on behalf of my Nordie‘s for medical marijuana right now we are planning to execute an expungement clinic in Arizona and more events will be announced shortly.”

Director of Medical Voices for Chamber of Cannabis: “This is an all  female founded, diverse, and inclusive non-profit. M4MM has partnered with www.thechamberofcannabis.org to advise the organization on social equity policy recommendations.”

Nicole does work for, and has also worked as a Brand Ambassador for Greenheart and Director of Business Development for AURA Ventures.

Nicole’s story, fight, and passion is inspiring. Nothing has stopped her and she continues to make strides toward big time global goals in the cannabis space:

“Over the years I have extended my network within the industry to provide potential clients with the resources they need to succeed in the billion dollar global cannabis industry. My long-term goal is to acquire my citizenship of Trinidad and Tobago so that I can relocate, purchase land, and become a cannabis and hemp farmer. My dream is to build healing homes throughout the Caribbean; places where people can go and receive naturopathic medical treatment in a tropical paradise using indigenous medicinal plants.”