By Sharon Letts   Sarah Russo, pens on her website, “While imperialism, capitalism, and oppressive systems have evolved and penetrated the very core of our experience, plants prevail in our psyche in profound ways.” Educated words coming from the daughter of renowned cannabinoid researcher and neurologist, Dr. Ethan Russo. “My mother was a nurse and […] 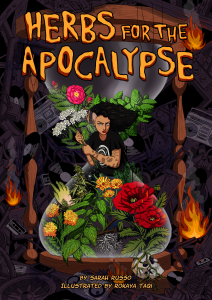 Sarah Russo, pens on her website, “While imperialism, capitalism, and oppressive systems have evolved and penetrated the very core of our experience, plants prevail in our psyche in profound ways.”

“My mother was a nurse and my grandfather and uncle were veterinarians,” she shared. “At one time I thought I wanted to work with animals, but I was drawn towards environmental studies and eventually became a self-taught herbalist.”

Her work in progress, “Herbs for the Apocalypse,” is a graphic novel with a dead serious topic- empowering earth’s inhabitants in the face of environmental degradation. The work gives voices to beneficial plants as its heroine grapples with the destruction of the earth, and the realization that plants can save us.

Russo says she encourages a connection with nature, because we desperately need it.

“We’re wreaking havoc on our ecosystem,” she laments. “The planet is in revolt. We live in trying times but we also have an invaluable collection of tools to collectively cope, heal ourselves, and build resilience in order to face what is to come.”

A longtime plant enthusiast, Russo received a degree in environmental studies and social justice, with a focus on botanical medicine from Evergreen State College in Olympia, Washington. Today, she makes her home in Spain.

Her day job as a freelance writer, researcher, consultant, and editor, gives her more than 13 years of experience in the cannabis and herbal medicine space. She’s fierce in fighting for the right of humans to use plants as remedy, for spiritual practices and for healing the earth.

Drawing from the therapeutic wisdom of the plant, fungi, and animal kingdoms, Russo guides her readers through Herbs for the Apocalypse, preempting, “Plants and punk rock collide in a tale of apocalyptic reckoning, explored in a graphic novel of resilience and resistance in trying times.”

The Herbs for the Apocalypse website is naturally loaded with information on herbs, with recipes and anecdotal stories on some of the most demonized superplants on the planet including cannabis, kratom, and fungi.

Push back is a given, as Russo educates on kratom , a tropical evergreen from the same family as coffee, used as a harm reduction tool, weaning people off opiates, mitigating the symptoms of withdrawal.

Humans are good at bastardizing beneficial plants, as witnessed with the super beneficial, and fatigue-combatting plant, Coca – otherwise known for its byproduct of cocaine.

Another article is titled, “Is Cannabis Psychedelic? Let’s Go Deeper,” as she expounds on the plant as a tool for expanding consciousness. Begging the question, “Does its ability to enhance visual, auditory, and sensational experience warrant a definition of it as a psychedelic?”

Not just a cup of herbal tea within these pages, but plants as serious remedies for what ails us, as well as posing tough questions and taking a stance with another article penned, “Our Symbiotic History with Mushrooms & Our Right to Use them.”

Videos within her feed have Russo in a field of wildflowers welcoming viewers, “Hello, oxygen breathers,” as she discusses what herbs help with trauma.

“Adaptogens combat stresses,” she explains. “Chamomile is a favorite de-stressor, Tulsi is a favorite of mine, and has been said to also deal with ancestral trauma.”

Ancestral trauma isn’t something commonly discussed by the masses, but Russo digs deep when speaking of plants and their ability to cross over into many of our biological and neurological systems.

Is your soul in distress? No matter, there’s a plant for that.

Another video with herbalist and botanical artist, Katy Able, has them discussing plants you might want with you if you were stranded on a desert island (or facing the apocalypse). Many plants that boost the immune system are discussed, as well as ingesting nutritive herbs, otherwise known as superfoods.

Superfoods are any beneficial plant with myriad compounds able to address all of our biological systems and many ailments. (see Daily Dose, Superfoods, Super Plants, Super Healthy!)

The top ten suggested plants for an apocalypse can be found within the pages of the graphic novel. To offer a hint, Russo has depicted all 10 on the cover. For a sneak peek, watch the animated Herb Monologues on the Herbs for the Apocalypse YouTube channel.

Regional herbs are also discussed. Many super plants that pop up around the world in many climates, are often thought of as weeds. They are actually there because we need them. It’s a symbiotic relationship we as humans need to find again.

“Nettles and dandelion can be found just about anywhere, and both are highly advantageous for many ailments. It’s just too bad we pull them from the ground by medicinal roots,” she added.

Russo suffers from two chronic health issues, an undiagnosed digestive disorder and polycystic ovary syndrome, both helped with the use of cannabis and other plant based remedies.

One doctor she consulted with for cannabis told her that her longtime use probably quelled many of the symptoms, and that she may have presented much worse without it. That said, she doesn’t solely rely on cannabis for her daily dosing, and in fact, found it necessary at one point to take a break.

“I’ve been using cannabis half my life at this point,” she shared. “I don’t normally smoke for work, but one day recently I was nervous about a particular meeting online, so I took a couple of hits. It was awful, and made me more uncomfortable. I came to the realization that it isn’t cannabis’ job to fix the problem I was having. It was mine.”

Cannabis, she said, is a diva and can sometimes upstage other parts of your experience. The break was needed for clarity.

“Cannabis is good at doing so many things, but when I took a step back without it, I was able to tune into subtleties. At times, cannabis can blast you into a different consciousness,” she said.

From the Cannabis Clinicians website, Russo pens, “Modern day studies have repeatedly found that active constituents of single plant species are not as effective as multiple formulations composed of various botanicals. This may be why certain cultures have historically employed holistic herbal formulations, as opposed to single plant remedies. It has also been shown that human populations that consume a diet rich in plants view disease-prevention as a way of life.”

Russo said she’ll smoke in the evening to unwind, or to quell a specific symptom. But most of her use now is as needed and purposeful.

Her most consistent daily dosing comes from the garden to the kitchen, as she uses rosemary, thyme, and an abundance of beneficial plants as the season dictates. She’ll also add blood-sugar lowering cinnamon often, as well as other favorites for teas and tinctures, including tulsi and chamomile for calm, and blue lotus for entering into a meditative state – as she works with various plant medicines in a ceremonial context.

“Science may never be able to elucidate on the true healing capacity of botanical medicine,” she explained in an article on Graphic Medicine.com. “That isn’t to say that we shouldn’t try to find scientific discoveries to benefit our health. But research shouldn’t discount the energetic, vibrational, and spiritual aspects of the natural world.”

Herbs for the Apocalypse, The Graphic Novel

Herbs for the Apocalypse was first presented to the public as a weekly Sunday Comic digital release in 2021, with a new installment and its own sound track each week. Sarah and her illustrator, Rokaya Taqi, are currently crowdfunding to make the print edition a reality.

The project was created by women, written with a feminist queer perspective, with characters written from a place of empowerment, rather than the often sexualized women found in mainstream comics.

The graphic novel in progress depicts its main character, Sofia Spinoza, and her frustration at the human race for destroying the planet. Plants are given voices via monologues. Spinoza takes a job in a herb shop – never letting on to her co-workers that the plants are speaking to her, as the story unfolds.

The herb calendula waxes poetic, reminding us our cells are always regenerating, and that this beneficial plant’s flower opens with the sun, following it throughout the day. “Many are drawn to my sunny appearance,” the flower says. “I prefer to join forces, growing among other plant allies in the garden – a unity of forces supports a dynamic ecosystem – and with that comes a connection to the self and the great all-knowing.”

The plant Yarrow speaks as a warrior from the garden, with tales of resisting drought, and encouraging boundaries for those that connect to other’s energies. The plant asks for you to tune in, and love – for that will make you infinite.

Strong words from the plants to humans, but Russo says they speak to us all the time, we just need to know how to listen and accept their goodness.

“Mother nature is our greatest ally,” Russo surmises. “We just need to respectfully learn from her therapeutic wisdom.”

For more information and to support Herbs for the Apocalypse visit, https://www.herbsfortheapocalypse.com/

A crowd sourcing link to support the project is on the website.