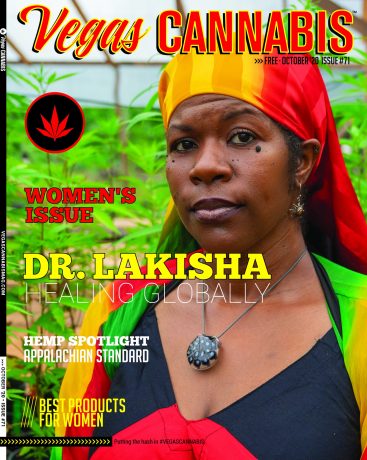 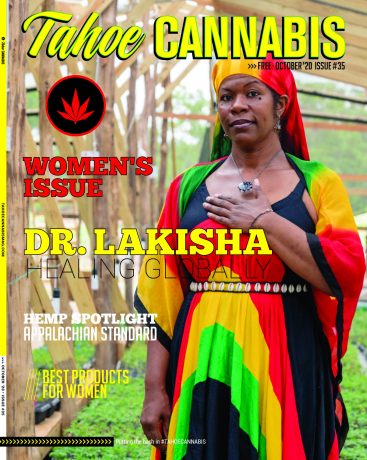 Article By: Stephanie Shehan Photos By: PhoJographer When requesting this interview, I messaged Dr. Lakisha Jenkins via Facebook.  I quickly discovered that she had a sense of humor when she graciously agreed to the interview and then said “I was just looking at your profile and we have 420 mutual friends! I think that’s a […] 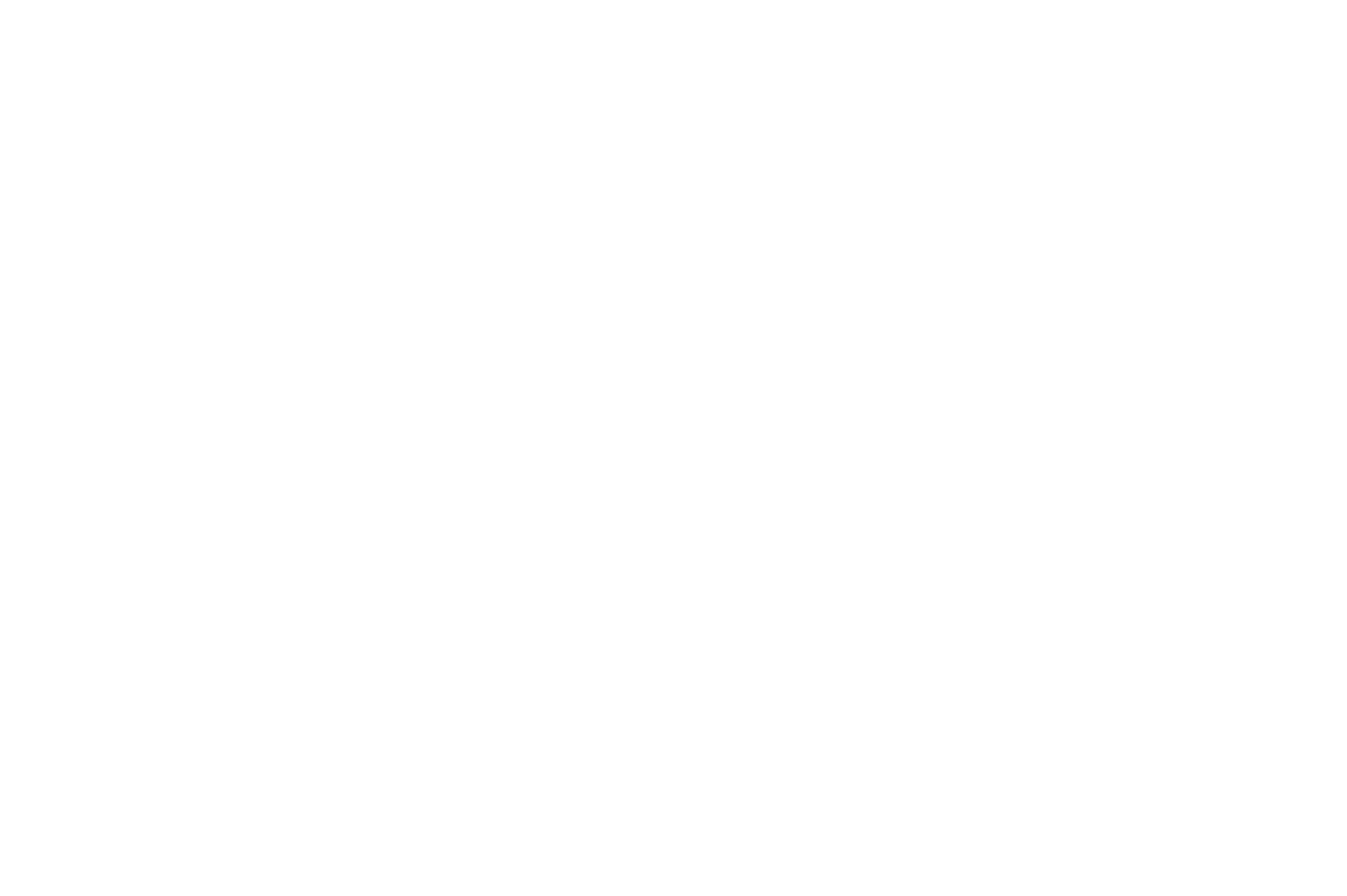 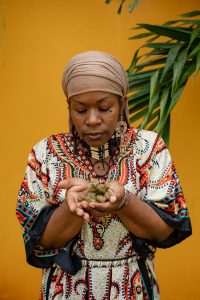 When requesting this interview, I messaged Dr. Lakisha Jenkins via Facebook.  I quickly discovered that she had a sense of humor when she graciously agreed to the interview and then said “I was just looking at your profile and we have 420 mutual friends! I think that’s a sign.”  After speaking with her on our Zoom call, I realized not only is she funny and down to earth, she is probably one of the most passionate and intelligent women I have ever met.  Her knowledge of the cannabis plant and all of it’s benefits was astounding and our conversation was refreshing.

Stephanie Shehan:  You are a Traditional Naturopath and a Master Herbalist.  And, as we speak, Covid 19 is rampant.  What are your thoughts on the virus?

Dr. Lakisha Jenkins: It’s the unknown variables that concern me.  What I do know about the virus is that it speaks directly to our DNA meaning that it can mutate based on a host.  What the media is not telling you is that, last time I checked which was back in April, there were 19 variations of the virus.  There are likely more variations now and when it meets a new host, it can turn into a different version.  Those working on the vaccine are going to have a very hard time because it will be very difficult to come up with a vaccine that treats the different variations.  What I am worried about is the virus finding that right host and then possibly turning into something we are unable to control.

Stephanie:  Tell me about your background and what led you to the cannabis industry.

Dr. Lakisha:  My husband was always a supporter of cannabis so I was exposed to it, but it was never something that I actually tried.  My first-born daughter was diagnosed with brain cancer at just 8 years old.  Upon diagnosis, I immediately questioned whether chemotherapy and radiation were the right course of action.  It just didn’t feel right so I started studying alternative therapies.  Alternative medicine is definitely part of my heritage, my grandfather was a native healer, so it was always there but once my daughter was diagnosed, I really started focusing and looking for something else.  Once I figured out that the Endogenous Cannabinoid System is the epicenter of homeostasis, that it regulates almost every system in the body, and that if it isn’t supported that we can never experience true healing my thinking completely changed.  Then came the devastating response from my daughter’s treating physicians who told me that I was not able to choose treatment options for my own child because she was a minor.  I was informed that if I did not comply with the protocol they were dictating that the State of California would take away my parental rights.  It wasn’t right, nor was it fair.  And it was then that I decided if I could not help my child, I would fight to make sure that everyone after her had access to alternative therapies including medical cannabis.  That experience was definitely my catalyst for change.  My daughter did not die from cancer.  The doctors were able to remove all of her brain tumor after her second brain surgery.  It was the four year battle with chemotherapy and radiation which her body was unable to recover from.  I didn’t want her to go through the chemo, the doctors didn’t let me decide, and in the end all they offered me was an apology.

Stephanie: What you went through was devastating and I cannot even begin to imagine what that must have been like.  It sounds as though what you experienced in losing your daughter led you to a path of healing others.  Tell us what you now know about the healing potentials of the cannabis plant.

Dr. Lakisha: Whole plant medicine is the only way to go.  There are no tests that determine the appropriate level of endogenous cannabinoids for optimal human function.  And, there are no tests to measure the amount of endogenous cannabinoids within our bodies at any given time.  So there is no exact way to know how to supplement those, and we are definitely not at the point where we should be isolating any one cannabinoid.  Ideally, we need to intake a product containing a full cannabinoid, flavonoid, terpenoid and lipid profile.  This way, our bodies can choose to utilize whatever parts of the plant it needs at that time and then discard the rest.  I view cannabis more as a nutritional supplement as opposed to a drug.  Nutritional supplements are necessary to the maintenance of the human body.  Babies receive endocannabinoid supplementation via breastmilk but once they are weaned, the deficiencies begin.

It isn’t a question of whether or not you should be supplementing your Endogenous Cannabinoid System.  You should, and there are three things you need to address.  What product, in what dose, and what delivery method?  If you get one of those three variables wrong, you will come to the conclusion that you need to make adjustments.  As a trained Naturopath, my job is to bring your body into homeostasis.  There is only one illness and that is the absence of health.

This is the civil rights issue of modern times.  It is a civil rights and human rights issue.  Medical disparities are created by the lack of information and education around the Endogenous Cannabinoid System.  People are dying and they don’t have to.

Stephanie: You were a big component in California’s medical cannabis movement.  How did you feel once California legalized recreationally?

Dr. Lakisha: In California, we regulated the medical cannabis industry in 2017 and legalized recreationally in 2018 and weren’t ready for either one.  And, I personally am not in the business of hemorrhaging money and to be actively in business in California today would be just that.  I worked very high at the policy level and I knew what was coming down the pipeline and what the industry was going to look like.  This very much impacted my decision to move to Jamaica.  I fought for the cannabis industry in California for a very long time.  From being a Founder of the California Cannabis Industry Association to working on the regulations for medical cannabis and then working towards legalization, at the end of the day, I was just tired of fighting and I made the decision to do what I was doing in California but on a global level in Jamaica.  Here in Jamaica, it is basically like California in the early 90’s when everybody was just trying to figure it out.  Here, I have the chance to help them do it right, while having the benefit of global export.  I now work very closely with the industry players and policy makers in Jamaica and I am able to caution them of the mistakes made in California and the rest of the United States.

Stephanie:  Now that you are residing in Jamaica, do you still have businesses back in California?

Dr. Lakisha: I do, manufacturing and distribution.  I also have some equity interests in retail operations.

Stephanie: You are currently residing in Jamaica, what led you there?

Dr. Lakisha: Back in 2017, I was invited to Jamaica to speak at the Sensimilla Cup & Conference.  I saw opportunities in Jamaica but didn’t really have intentions at the point of leaving California.  Shortly after, I was contacted by a business partner from Jamaica and presented with opportunities of work that could be done in Jamaica.  And, given the issues that California was undergoing during that time, a permanent move to Jamaica just made sense.  I returned to Jamaica in 2018 and spent two weeks there.  During that time, I met with government officials and key industry players and quickly realized that the business opportunities were real and something that I wanted to focus on.  I returned to California and had a family meeting with my children and explained the opportunity to them.  We had a family vote and collectively decided that in order for me to pursue this, we would need to leave California and on March 14, 2018 my family and I officially made the move to Jamaica.

Stephanie: You also have your own branded phytocannabinoid supplement.  Tell us about that.

Dr. Lakisha: As a Naturopath, I have close to 500 proprietary herbal blends.  And, here in Jamaica I have a newly found access to the plants native to this area.  I have recipes that I have formulated for a myriad of conditions.  These formulations were developed by meeting with people, addressing their concerns and finding solutions.  They are effective because they were developed and personalized to address specific issues.  The main product currently available on my website is my full spectrum, hemp-based, phytocannabinoid supplement.  Look for additional products and formulations soon.

Stephanie: How can our readers follow what you are doing or order your branded products?