Alzheimer’s disease is the most well-known of all the types of dementia. Dementia causes progressively worsening difficulties with memory, thinking, and behavior. As the disease progresses, it affects such basic functions as speaking, walking, and swallowing.

Alzheimer’s disease is the most well-known of all the types of dementia.  Dementia causes progressively worsening difficulties with memory, thinking, and behavior. As the disease progresses, it affects such basic functions as speaking, walking, and swallowing. It is currently the sixth leading cause of death in the United States (and the only one of the top ten that has no known prevention or cure).  Approximately 5.4 million Americans suffer from Alzheimer’s, including an estimated 41,000 Nevadans. Although Alzheimer’s disease is not specifically defined as an approved medical condition for medical cannabis use in Nevada, patients or their caregivers, with proper documentation, have the option to appeal for entry into the program. We will examine the underlying causes of Alzheimer’s disease and the evidence for the use of cannabis to treat both the symptoms and causes of Alzheimer’s disease. 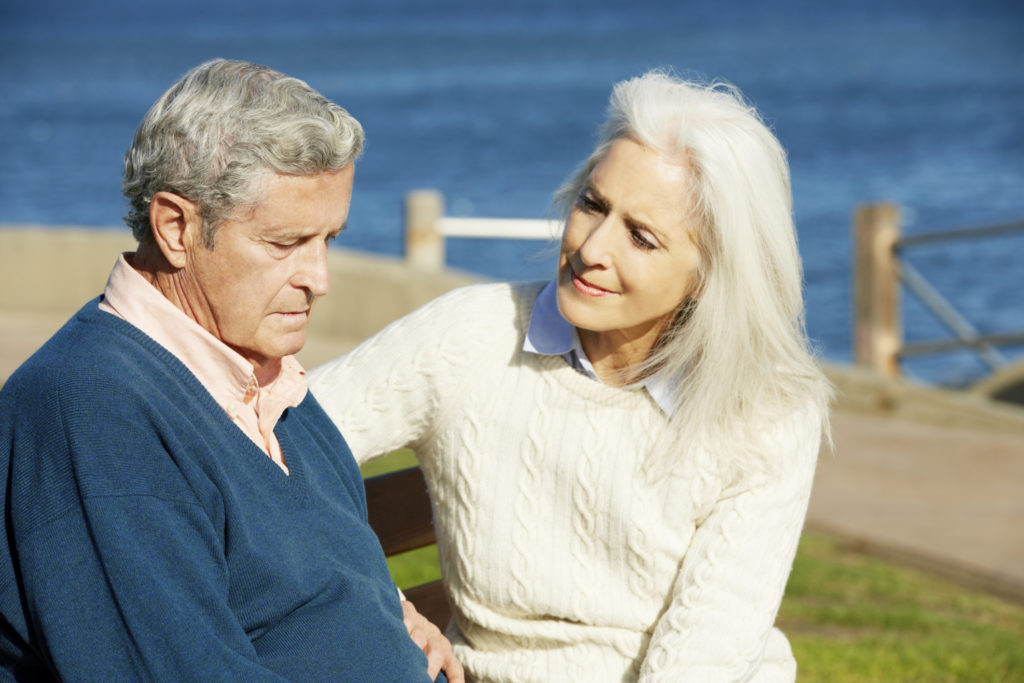 Alzheimer’s disease is believed to be caused by inflammation in the brain (from stress, aging, or environmental exposures), which leads to the formation of amyloid beta and tau proteins. Amyloid beta proteins accumulate into plaques that deposit between nerve cells in the brain, while tau proteins accumulate into tangles inside the nerve cells in the brain and throughout the body, which eventually leads to dementia symptoms. However, Alzheimer’s disease-associated plaque development may begin up to 20 years before symptoms are apparent. Although plaques and tangles are formed as a normal part of aging, they are much more plentiful in Alzheimer’s disease.  The plaques and tangles begin accumulating in the part of the brain responsible for memory and learning, eventually spreading to other parts of the brain responsible for walking, talking, and eating. It is not yet known what the significance of the plaques and tangles is, but they are believed to disrupt the communication between nerve cells, eventually leading to nerve cell death. Once nerve cells die, they cannot be regenerated. Death of nerve cells leads to worsening symptoms, including the loss of self-care (including basic functions as eating, drinking, and toileting), as well as the regulation of breathing and heart rate, which slowly and eventually leads to death.  Currently available treatments ease some of the symptoms of the disease, such as confusion and agitation, but do not affect the progress of the disease.  Cannabis and the endocannabinoid system have only recently emerged as potential research targets for treatment both of symptoms and causes of Alzheimer’s disease.

A 2016 study published in the Journal of Alzheimer’s Disease investigated the use of cannabis concentrate oil to treat symptoms of Alzheimer’s disease. 11 Israeli patients had medical cannabis oil added to their current medication regimen for 4 weeks. Patients were assessed on the following symptoms before adding cannabis and after 4 weeks of treatment: delusions, hallucinations, agitation, dysphoria, anxiety, apathy, irritability, euphoria, disinhibition, aberrant motor behavior, night-time behavior disturbances, and appetite/eating abnormalities and caregiver distress. Patients were measured on the Clinical Global Scale, which assesses the severity of illness, and the Neuropsychiatric Inventory, which measures both the frequency and severity of symptoms. Prior to starting therapy, patients’ average CGI score was 6.5 out of 7 (with 7 being the most severe). After 4 weeks of treatment with medical cannabis oil, the CGI score dropped significantly to 5.7. NPI scores also significantly dropped from 44.4 (out of a possible 144 at the most severe) to 12.8 after treatment with cannabis oil.

The drawbacks to this study are the small sample size, the lack of placebo control, and the fact that patients and their caregivers knew that they were receiving cannabis oil. The study was only conducted over a few weeks, so unfortunately, we don’t know if cannabis would be effective in reducing symptoms over the long term, or if any side effects, interactions, or worsening of symptoms would become evident over a longer term. However, the study shows great promise, and hopefully will lead to longer, larger and placebo-controlled studies in the future.

Other studies looked at the effect of cannabis to affect the underlying causes of Alzheimer’s disease. In a 2016 Frontiers of Neurosciencereview article, the authors reviewed several studies conducted with lab-grown nerve cells, as well as in mice bred for a predisposition to Alzheimer’s disease. Both types of subjects showed an increase in inflammatory chemicals when they were exposed to stress, which led to the development of amyloid beta proteins and associated plaques. These increased inflammatory chemicals were also associated with an increase of Cannabinoid-Type 2 (CB2) receptors, as well as alterations in some of those CB2 receptors that impaired their function.  When those nerve cells (including the ones in the genetically-modified mice), were exposed to cannabis or synthetic cannabis derivatives that stimulated the CB2 receptors, the inflammatory chemicals decreased, and receptors returned to nearly normal function.  As a result, no further damage to nerve cells occurred, nerve cells were able to expel the toxic proteins, and nerve cell life was continued, arresting the progress of Alzheimer’s disease in these cell and animal experiments.

In a study published in the Journal of Alzheimer’s Disease in early 2015, researchers examined the effect of botanical extracts of delta-9 tetrahydrocannabinol (THC), cannabidiol (CBD), and a THC/CBD combination on Alzheimer’s disease symptoms in mice with a genetic predisposition to Alzheimer’s disease and early stages of the disease. 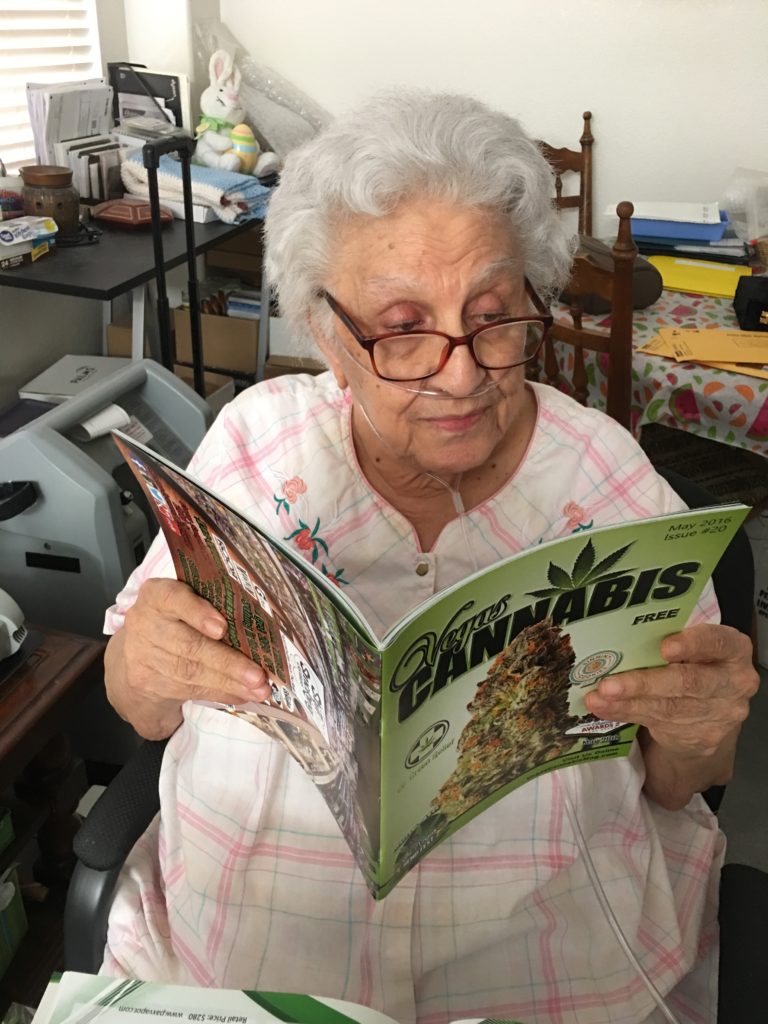 The THC/CBD combination, but not THC or CBD alone, led to a reduction in learning impairment, decreased amyloid beta proteins and inflammatory chemicals in the blood, and led to a change in the plaque composition. Unfortunately, this study did not have a placebo group, and did not randomly assign mice to treatment. Experimenters were aware which treatment group each mouse was in, which may have led to bias on the part of the researchers. However, the results show that cannabis has the potential to treat both the symptoms and at least some of the causes of Alzheimer’s disease.

The most recent study that was published showing a potential benefit of cannabis to treat Alzheimer’s disease was conducted at the Salk Institute using a single parent cell culture derived from a human brain tumor. In this study, published in the June 2016 issue of The Journal Aging and Mechanisms of Disease, these human cells were experimentally altered to produce high amounts of amyloid beta proteins, which then began producing increasing amounts of inflammatory markers such as cytokines, eicosanoids, prostaglandins, and leukotrienes. These inflammatory chemicals were found to progressively hasten nerve cell death, which leads to disease progression.  However, when the same cells were exposed to cannabinoids such as THC, which stimulate CB2 receptors, amyloid beta production was decreased and resultant inflammatory chemical production was eliminated, leading to decreased nerve cell death. Experimenters also exposed the cells to CB2 receptor blockers, which increased the production of inflammatory chemicals and amyloid beta proteins and accelerated the time to nerve cell death by 50%. While still preliminary, and only conducted in human nerve cells, this study shows that cannabis may have a strong role in stopping the progression of Alzheimer’s disease, especially in its most early stages.

Edible products containing cannabis are a very accessible way for patients with Alzheimer’s disease to medicate, especially if the patient has never used cannabis or has not used cannabis for many years. Cannabis-infused products are available in a wide variety of forms, from candies and sweet treats, to beverages and even savory snacks such as popcorn or macaroni and cheese. Start with a very low dosage (10 mg or less), then wait at least 45 minutes before evaluating the effect of the dose. The cannabis in infused edibles must be digested by the stomach, metabolized by the liver, then absorbed into the bloodstream by the small intestine, all before it can be utilized by the body to cause a therapeutic effect. If the patient does not wait long enough for the edible to take effect, he or she can easily take more than is needed, possibly leading to undesirable side effects. And just as it takes longer to take effect than other ways of taking cannabis, it also takes longer to wear off than other dosage forms, so if the patient takes too much, the undesirable effects will last longer than with other dosage forms. So remember to start low (low dose) and go slow (wait at least 45 minutes before giving additional doses) when medicating with edibles.  When used as they are intended, cannabis-infused edibles provide a safe, effective, and easy way to treat Alzheimer’s disease.

The use of cannabis to treat Alzheimer’s has only recently begun to be studied.  Researchers have experimented heavily over the past 10-15 years on genetically modified mice and human cell cultures, but only a few studies have been conducted with humans. Heavy restrictions on the use of cannabis in research have inhibited the progress of further investigation. Synthetic and botanical cannabis have both shown great promise in the treatment, and possibly prevention, of Alzheimer’s disease through the reduction of inflammatory markers, amyloid beta plaques, and tau protein tangles that are the hallmarks of Alzheimer’s disease.  For a disease lacking adequate treatment options, cannabis provides a beacon of hope to the millions of Americans affected by this devastating and heartbreaking illness.
By: Dr. Kit, Pharm.D, RPh.